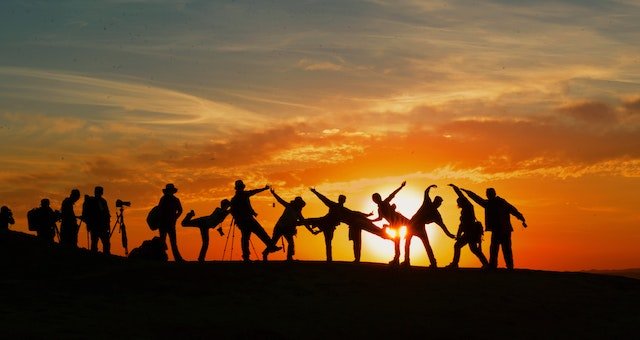 On Sept. 8, the Center launched a new discussion series called A Little About A Lot. By all measures the launch was a success: people attended, people engaged, people walked away enriched by the affirmation that we are fellow sojourners attempting to grapple with troubling times with awareness, compassion, and wisdom. Brevard’s own Brandon Cook facilitated the discussion and set a bountiful table of theory, practice, and an invitation to progressive thought and deed…together. Like the Center’s Reel Spirit Movie Project this discussion series seeks to find more Togetherness, less Otherness.

For the launch, the topic of discussion (In Groups and Out Groups: Scapegoating & the Rise of Polarization) had some urgency, addressing what could be underpinning the growing polarization in society and the inherent demonization of Other that such polarization brings. We are beset by challenges in engaging with Other. And our nature is imperfect, flawed by unconscious bias, cognitive dissonance, and the distinct possibility that our desires are not really our own, but rather a product of group-think and an innate longing to belong. And within all that rests the recognition that we—alone—are almost powerless to affect necessary social change. It seems that with so much potential to fall away into darker corners of prejudice, Other becomes the counterfoil for our fears, our hopelessness.

And labels make Other easier to identify and demonize. “Republican” and “Democrat” and their synonyms “conservative” and “liberal” have become weaponized, pre-defining where one stands on all moral questions of our times.  Al this is what the opening act of A Little About A Lot explored.

In religious contexts, labels like “Christian” and “Muslim”, “Sikh” and “Hindu”, ”Buddhist” and “Taoist” carry baggage not even remotely claimed by those who claim the label as their own. The next installment of the series (Do Atheists Believe?) aims to explore labels further and asks the question, “Do theists and atheists share a common spirit?” A humbler walk together suggests we do.

Describing the South African principle of ubuntu, Desmond Tutu, in the documentary Mission:Joy Finding Happiness in Troubled Times, offers this: “A person is a person through other persons…We can be human only together.” Bringing people together in spirit is what drives the mission of the Center. While exploring and celebrating the diversity of Other, we aim to recognize the transcendent power of Together.

Thank you for being part of our Together.