What’s With the Smiles? 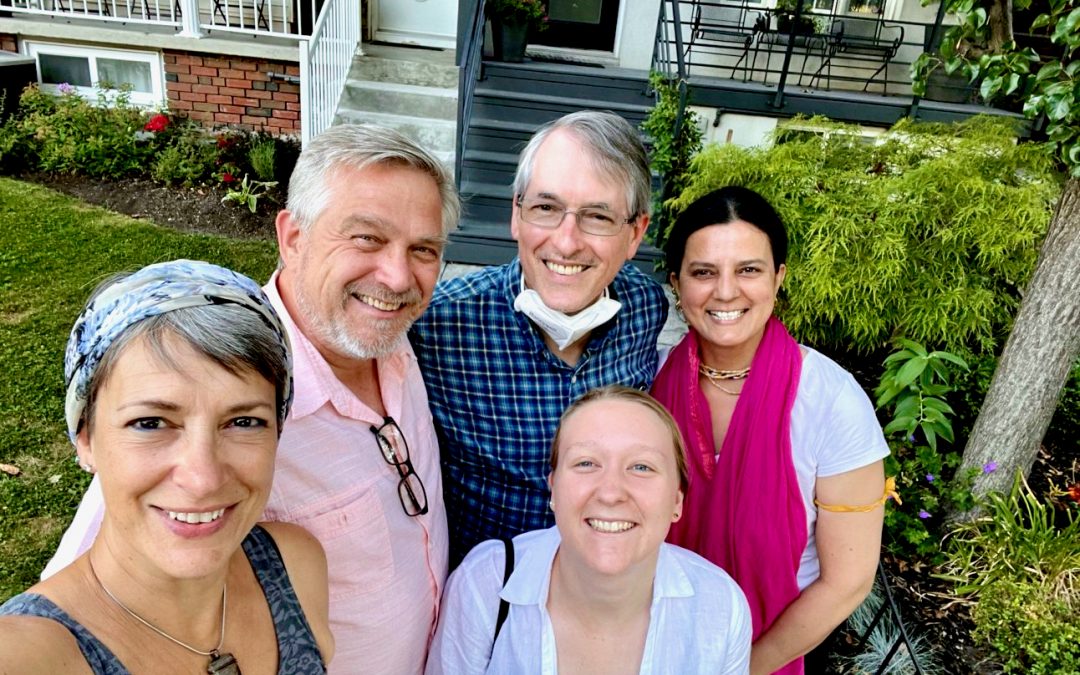 Here we are in Toronto about 10 days ago, staff & associates of the Center, with our Lyft driver (on the right, pink scarf). We’re smiling because we just had an unexpected encounter we will not soon forget, all riding together in the same car.

It was the final evening of our “Discovery Week” conference, organized by Encounter World Religions. Thanks to the generosity of CSW donors and our board of directors, the four of us spent the week in Toronto, enjoying a deep dive into the world’s major religions. My most meaningful encounter of the week happened in Dipakshii’s car when she picked us up from the restaurant where we had lovely a “farewell to Toronto” meal. As soon as we got in her car, we noticed a small statuette of a Hindu deity on her dashboard.

“I see what you’ve go on your dashboard,” I said. “We’ve just been learning about Hinduism and other religions this week.” Dipakshii’s face lit up, became very animated, and she proceeded to describe in depth her love of Hinduism and her conviction that the great religions of the world all have the same basic intention: to draw believers into a deeper love of the divine, and to make the world a better place. (CSW Associate Terry Decker offers his take on this experience and the conference in his own reflection.)

This 20-minute car ride with colleagues and our new acquaintance was a perfect distillation of the deep wisdom that undergirds the great religious and spiritual traditions of the world. This wisdom tells us there is something bigger than us, but simultaneously part of us. It invites us into a relationship that can make more of us — and even transform us. What we call this mysterious “something” is, of course, a matter of great speculation and sometimes heated debate. As we learned during our week in Toronto, however, the similarities among the world’s religions are there if we choose to look for them. The commonalities are easier to find when we seek them in the lives of fellow human beings who are trying — like us — to survive and make meaning in an often-chaotic world. That’s what a Lyft driver named Dipakshii helped me learn, a realization for which I will be forever grateful.

In all we do, Center for Spiritual Wisdom works to make room for these kinds of discoveries. One such opportunity comes the evening of Aug. 16, when CSW is hosting a free public screening of “Mission: JOY” — a beautiful and moving documentary featuring the Dalai Lama and Archbishop Desmond Tutu, two of the great spiritual leaders of our era. In spite of their differing traditions (Buddhism and Christianity), these two men demonstrate the enduring value of friendship in the pursuit of happiness. Plan now to join us at the Co-Ed Cinema in Brevard on Aug. 16 at 6:30 p.m., or at one of our other offerings. (Learn more about the Center’s public screening of the documentary HERE.)

In the meantime, peace, joy and all blessings to each of you.